Real access to energy impacts many areas of a country's life. For example, investing in renewable energy to develop emerging economies promotes energy independence and facilitates their access to electricity.

According to the UN, 3 billion people can still not use clean and safe cooking fuels. Hence, Goal 7 of the United Nations Sustainable Development Goals for 2030 is to ensure access to affordable and clean energy.

The good news is that we are on track to achieve this. 2015 was a watershed moment to promote change, as for the first time, investments in renewable energy in developing countries surpassed those in developed countries. This was reflected in the UN-backed "Global Trends in Renewable Energy Investment 2016" report.

However, growth is not homogeneous among this group of countries. For example, 74% of the investment came from China, India and Brazil, countries with attractive economic projections.

But what is the reason for this change in trend?

- Rising electricity demand. Economic development and internet access are indicators that impact the rise in electricity consumption. Globally, in 2021, electricity demand increased by 6%, which was a new all-time high in absolute terms, according to the International Energy Agency's (IEA) January 2022 Electricity Markets Report. Although it was a year marked by coal shortages and the impact of the coronavirus pandemic, China and India saw a much more pronounced increase in electricity demand than other countries. 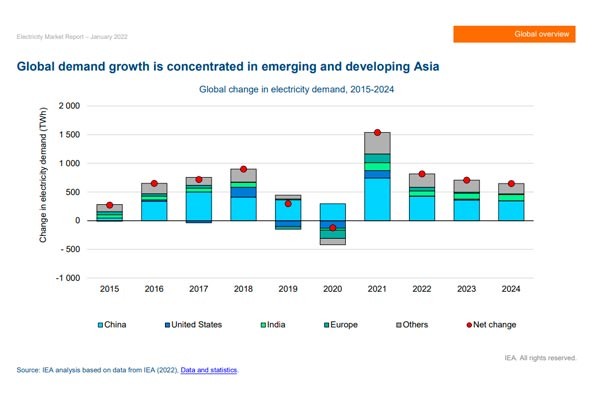 - Cost reduction of clean energies compared to traditional fuels. As a result, these technologies ceased to have a high and exclusive price and became democratised in all markets.

The decade from 2010 to 2020 was vital in the fall of the LCOE, the normalised energy cost. The utility-scale solar PV fell by 85% between 2010 and 2020, according to the report Renewable Power Generation Costs in 2020: Executive Summary by IRENA.

In addition, generating renewable energy costs less than using fossil fuels. For example, the same report states that renewable projects could save the electricity sector at least USD 6 billion per year compared to adding the same power generation from fossil fuel plants.

- Fewer coal projects. We cannot yet speak of their end, but we can discuss their reduction. In 2015, coal and gas-fired power generation accounted for less than half the investment in solar, wind and other clean energy, according to the report mentioned above by Bloomberg and endorsed by the UN. However, the challenge is more ambitious than preventing the construction of more coal plants; it is to shut down coal plants that have just come online.

- Increased awareness of the short, medium and long-term benefits of renewables. Cooperation companies and governments are more aware of these technologies' benefits than traditional power plants.

Little by little, there is more talk of ESG and sustainability criteria in developing countries, which leads to a direct promotion of renewable energies for the country's development. This, together with the above, is causing countries to move towards a change in their energy model with more innovative policies.

The benefits of renewable energies for the development of developing countries are numerous, but here are just a few:

- More affordable access to electricity. Compared to the cost of generating electricity in fossil fuel power plants. This directly impacts the economy of each inhabitant, whose price of access to energy will be lower.

- Less environmental pollution for its population. The case of China is perhaps the most striking. In 2019, China exceeded the total emissions of all OECD member countries (14.09 billion tonnes of CO2) by around 30 million tonnes. This data comes from the New York-based climate research group.

- More capacity to invest in new renewable projects. The democratisation of renewable energies means that with the same budget, emerging countries can embark on more projects and generate more clean energy.

- Greater energy independence from third parties. The installation of renewable technologies gives greater economic and energy independence to any country since it promotes self-consumption. But it is much more important in emerging countries, as they cannot compete under the same conditions when faced with a rise in the price of energy or fossil fuels in international markets.

- Promote the autonomy and sustainable development of families and communities. The 17 Sustainable Development Goals (SDGs) of the 2030 agenda include such relevant issues as environmental sustainability, reducing poverty and inequalities and greater energy and production efficiency. Until now, there has been a relatively large growth in improvement with SDG 1, "End Poverty" however, the pace of change is slowing down, and the crisis generated by COVID-19 is jeopardising decades of progress in the fight against poverty.

LCOH, how is the price of Green Hydrogen calculate...
Types of renewable power plants and their characte...

What is the water footprint and how do renewables impact it?

The next renewable energy auction in Spain