The planet is sending out 'code reds' for us to pump the brakes on global warming. The net zero emissions target is the only way to reverse course.

This goal was the central focus for the design of the 2030 Agenda for Sustainable Development and involves different approaches for different geographical areas that depend on the range of environmental characteristics that influence the production of goods and energy.

What is the net zero objective?

Net zero is the global challenge of progressively reducing CO2 emissions until carbon neutrality is reached. The goal is to reduce greenhouse gases to as close to zero as possible so that the amount can be absorbed by healthy oceans and forests.

This is certainly an ambitious and urgent target, and arguably one of the greatest challenges humanity has ever faced. It requires a far-reaching, global shift in the way we produce and consume energy.

• The global concentration of CO2 in the atmosphere registered the highest peak in 2022 (417.2 parts per million), with a rise of 2.5 ppm compared to 2021, according to the Global Carbon Project.

The graph below shows the rise in carbon concentration from 2015 to 2023. 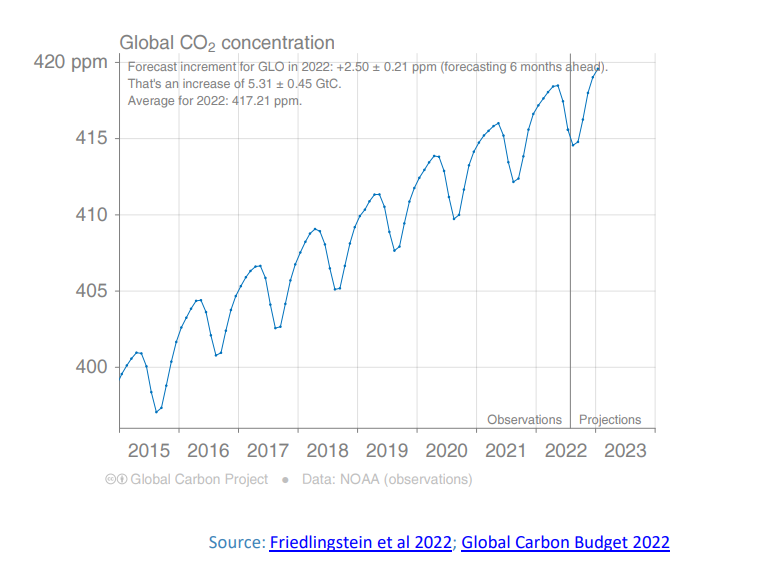 • Seventy-five percent of the greenhouse gases released into the atmosphere come from energy. While many countries have plans to decarbonize and promote renewables, there is still much work to be done. Greenhouse gases include water vapor (H2O), carbon dioxide (CO2), nitrous oxide (N2O), methane (CH4) and ozone (O3).

• The only drops in atmospheric emissions have been recorded during economic crises. Yet this needs to happen on a constant and sustained basis.

• While emissions did decline during the COVID-19 pandemic, the change was only temporary, according to the UN. "Concentrations of greenhouse gases in the atmosphere remain at unprecedented levels."

The graph shows CO2 emissions and their annual increases since 1920. 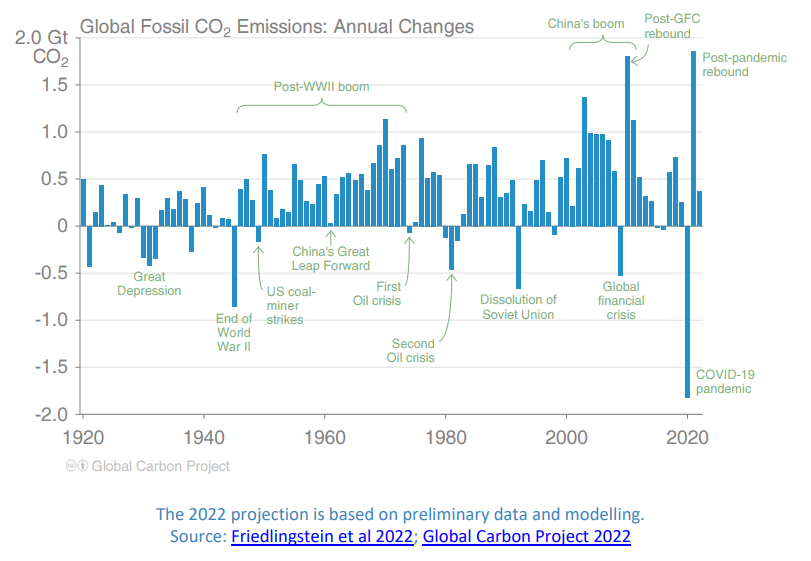 What global policies are driving the net zero emissions challenge?

The Paris Agreement was the first major global step towards achieving net zero. A total of 196 countries signed this binding agreement to limit global warming to below 2°C based on pre-industrial temperature levels, preferably keeping the increase below 1.5°C.

The Paris Agreement led to the creation of the NDCs (Nationally Determined Contributions), where each country proposes concrete measures that it will implement over the next 5 years.

Denmark provides one of the most encouraging examples.  Although it has not yet reached carbon neutrality, 50% of its electricity is sourced from wind farms and its emissions have fallen drastically.

The EU, on the other hand, has two commitments on the table:

The first of these targets goes hand in hand with those set by more than 70 countries. If met, it would mean a 76% reduction in global emissions, according to UN data.

The Race to Zero campaign is mobilizing cities, schools, banks and companies to promote decarbonization and the reduction of global emissions by 2030. This is all closely linked to organizations' ESG and sustainability standards.

Clearly, we need a society-wide global change to achieve net zero, and each one of us can do our part to help achieve this goal.

Did you know that one of the ways to take advantag...

More posts from author
Wednesday, 28 December 2022 Did you know that one of the ways to take advantage of sunlight to convert it into energy is through solar thermal power plants?
Thursday, 15 December 2022 The NIMBY (Not in My Backyard) phenomenon and renewable energies
Tuesday, 13 December 2022 Joao Martinho, new country manager for Vector Renewables Portugal

What is the water footprint and how do renewables impact it?